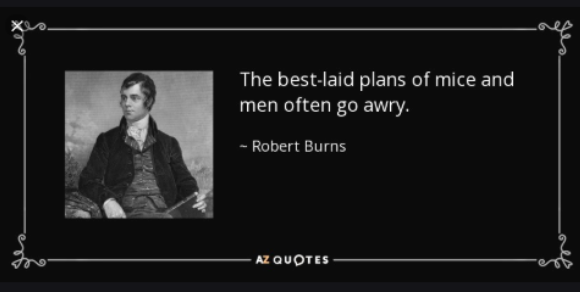 I thought carefully about the plans today, but then one unexpected event after another toppled those plans quickly. There are days like that in school, and I must say those days are not my favorite days.

First, I didn't anticipate a small computer snafu as well as a part of the program that takes a lot of time. Instead I expected a quick log on and practice session, but instead it was a lengthy event. Last year because we logged in earlier, that wasn't the case. A minor error, but one that upset the plans nevertheless.

Then, there was confusion in our wing about scheduling and staffing. I reached out to figure it out which created havoc. It wasn't the first time the team reached out to figure that situation out, but this time the question hit a nerve and created a problem. The good part was that the problem resulted in a better solution than was previously planned, and the difficult part is that the situation created worrisome conflict.

It was also our first day with a number of scheduling related issues, none of which were big problems, but instead a first try which left me thinking about how to schedule that time better for future Fridays.

The afternoon found the students settling into a good math activity, cleaning up the room, and having their first buddy day with kindergartners which was wonderful. While fifth graders worked with their buddies, teachers met to discuss a focus related to reading workshop and reading assessments. The mostly procedural meeting went well.

In hindsight, the day's challenges were born out of a dearth of communication--we didn't know what to expect and that lack of knowledge led to confusion which then, fortunately, resulted in a good solution for next week which was positive.

Educators know that flexibility is key to the job, but we also know that good communication, schedules, lead time, and collaboration result in a job well done.

The children were awesome today and that was the high point. Onward.