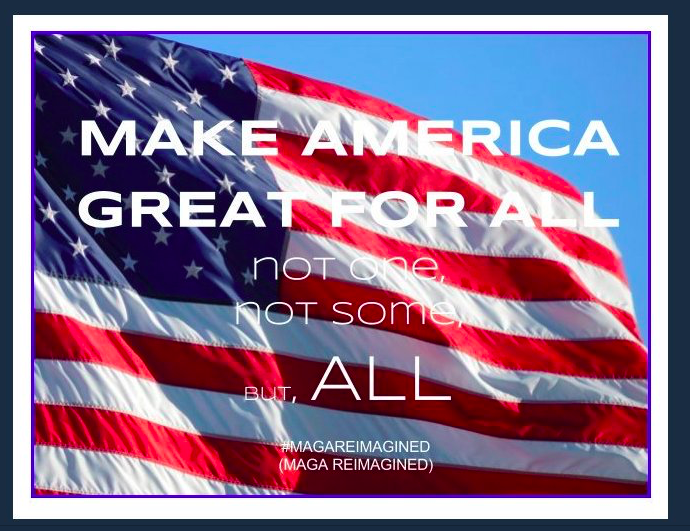 Imagine if Trump turned away from the 5,000,000 NRA members to better care for the ~325,000,000 Americans by following the lead of countries like Australia and RESTRICTING, REDUCING, and REGULATING gun use to lessen senseless violence.

Imagine if Trump and his cronies actually read the research, used good process, analyzed the situation honestly, and consulted experts in the field to make thoughtful decisions that truly spell positive change.

Imagine if Trump decided to spend less time on slick sound bites and marketing to truly lead our country forward with laws that demonstrate dignity to humanity, laws that recognize the human factor such as laws that allow DACA a path to citizenship rather than taking people away from the families they love and care for and sending them back to countries they don't know.

Imagine if Trump spoke, tweeted, and led with respect rather than using multiple demeaning comments to disrespect and diminish hard working, dedicated Americans.

Imagine if the 200,000,000+ registered voters in the United States did vote and voted for people who really care about developing a good, strong country--the kind of country that provides the supports that lead to life, liberty, and the pursuit of happiness for all.

Unfortunately Trump is mired in the swamp of cronies, will for wealth, and manipulation. He's not interested in the ~325,000,000 Americans, but instead committed to his own #wealth, #self, #popularity and that of a few family members and cronies.

I hope that the ~325,000,000 will begin to stand up, use their voices, and vote for what is right and good for themselves, their family members, neighbors, and communities. It's time to register and prepare to vote in upcoming elections. It may mean that people have to use a vacation day, rent a car, do some research in order to get to polling booths, but it's worth the effort to get ready to vote earlier than later so next time we're not led by a President that less than 1/3 of American voters supported in the last election. We can do better.
Posted by Teach Children Well at Friday, February 23, 2018