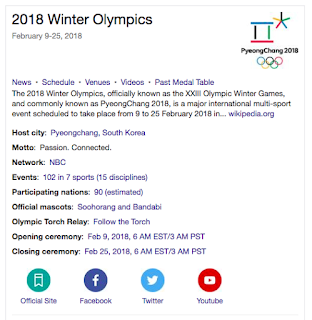 Yesterday the greater math team sat down to discuss Response to Intervention (RTI). We ended up with a large number of intervention groups, and then discussed the kinds of projects we'll use with the groups. We'll use a scaffolded project for several groups, the kind of project that is relevant, meaningful, standards-based, and engaging for students.

I've thought a lot about what that project might be and have come up with the following elements:

We'll have students work with partners and small groups on the project, and the scaffolding will lead students through a number of steps including the following:
This will build math skill and give students good context with which to enjoy the Olympics in the weeks to come.
Posted by Teach Children Well at Saturday, January 27, 2018