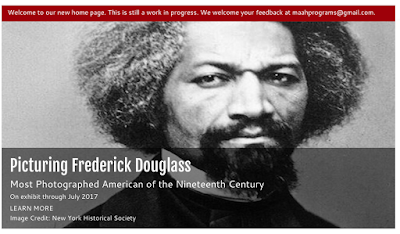 Our collective grade-level professional learning goal is to develop greater cultural proficiency in our fifth grade program. As part of the work to reach that goal we are conducting an in-depth study of Frederick Douglass.

What will that study include?

First we wrote a grant to the local grant source, WPSF, to host Guy Peartree who does a living history presentation of Frederick Douglass. He will visit our school sometime in January to present his work.

We'll prepare for his performance by introducing students to Frederick Douglass' life through read aloud and videos. We'll likely target the books and videos we'll use in the next few weeks and if you have recommendations, please send them our way.

Later we'll use Douglass' life as a model for the Global Changemakers Biography Project that students embark on in the spring.

Quite a few years ago we had an expert on multicultural literature come to our school. She emphasized that the world is filled with the stories of European Americans and that it's our job as educators to help students see the "rainbow" of stories that belong to America including the stories of all cultures, people, races, and interests that are underrepresented. In part, that's why we are focusing on Frederick Douglass story--a story that many still don't know well in America.
Posted by Teach Children Well at Saturday, November 26, 2016