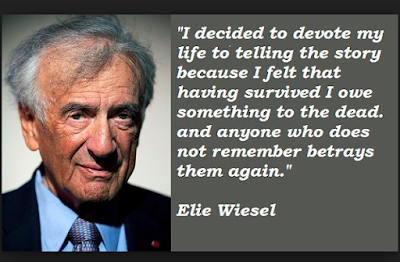 In stark contrast to those who use hateful speech, show disrespect, and/or war on innocents, Elie Wiesel was a champion of humanity.

I do not feel worthy enough to write about him, but I don't want to miss an opportunity to tell the story of how he shifted my view of the world so dramatically. In the early 1980's, a Worcester, Massachusetts' Jewish-American philanthropist, Jacob Hiatt, donated money to my college, The College of the Holy Cross, for a library addition. I was asked to help out at the dedication event.

Prior to the event, I had read The Diary of Anne Frank which prompted me to read more books about Jewish life and the Holocaust. I would lay on my living room floor wondering why people let the Holocaust happen or why the Vietnam War was going on as I'd read the paper and see the death counts climb. I also had Jewish friends from Forest Grover Junior High School and was curious about their religion and celebrations. Yet, on this day when the library addition was dedicated, I wondered why a Catholic college would invite Elie Wiesel, a Jewish man to speak. Until that day I had never heard of Mr. Wiesel, the famous writer, professor, political activist, Holocaust survivor, and future Nobel Laureate. 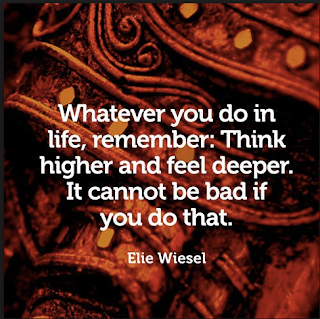 On that day, standing at the side wall of the library, I watched the well-dressed and prominent invitees enter the beautiful library. I listened carefully as Father John E Brooks, SJ, the President of The College of the Holy Cross at that time, speak. I wanted to know why this Jewish man was invited to speak at my college so I listened carefully. His words touched my heart and made me think differently about the people of the world and, in particular, the Jewish people who bore the burden of such atrocity. I heard his message so clearly as he reminded us that we can never forget the horror that happened and we must keep the story alive so that it doesn't happen again.

Sadly, in the news, we hear stories of religious hatred, racial prejudice, and cultural killings and genocide still. There are many who work against this however, and seek a more peaceful, loving world. They heed Wiesel's words, "I swore never to be silent whenever and wherever human beings endure suffering and humiliation. We must take sides. Neutrality helps the oppressor, never the victim. Silence encourages the tormentor, never the tormented."

It is with humility that I write this simple post, and it is with gratitude that I remember the opportunity I had to hear Elie Wiesel tell stories and share his wisdom so many years ago. To honor his life, I will put more energy into his call to be grateful, supportive, and reverent to all humans. This quote of his includes good words to lead my life:

"For me, every hour is grace. And I feel gratitude in my heart each time I can meet someone and look at his or her smile." - Elie Wiesel

So many in the world are thankful for Mr. Wiesel's life. He has helped us to see the promise and possibility life holds, and has given us the courage to speak up. Though he is gone, we can still look to his life and his words for strength, direction, and hope. I often feel that when good people die, love is everywhere, and that is how I feel today.
Posted by Teach Children Well at Saturday, July 02, 2016