Friday night fare at Educon 2.7 was a panel discussion of groundbreaking leaders from fields outside of education followed by a reception at the inspiring Franklin Institute. The amazing Science Leadership Students managed most aspects of the panelists' presentation including the filming, visual displays, and the event introduction. The panelists shared ideas, perspectives, and questions that inspired new ways of thinking about the work we do in classrooms.

This year's panelists as well as the conversation introduction by The Franklin Institute's President and CEO, Larry Dubinksi, provided many ideas to ponder including the following thoughts which will impact my work in the days to come. In many ways, it was difficult to capture the rich, wonderful, and sometimes controversial points shared, but since I didn't want to lose the thoughts for later inquiry and application, I wrote down those ideas that impacted me the most.

Dubinksi highlighted Philadelphia, The Franklin Institute, scientists and scientific discovery. In particular he noted Dean Kayman's multiple patents including an invention to purify water. He also showed a picture of George Whiteside's amazing "lab on a chip" and an image of MIT lab's foldable cars. As he continued to introduce scientific invention, I wondered about the frequency with which we share new inventions and dynamic scientists with young students--information that would likely inspire their own creations and investigations. Is there a regular webcast about this? Perhaps Flocabulary can add this to their repertoire with a weekly "science discovery flocab."

The panelists discussed the role of connection. Deepti Sharma Kapur, Founder/CEO of FoodToEat told the story of her company's start, a start which began with recognizing a need and then investigating and fulfilling that need with a process that included multiple connections and conversations. I look forward to telling my students Deepti's story as I know her work and experience will inspire many.

Zack Brisson, Principal at Reboot, noted that "connections are critical," but not all connections are positive. He said that it's important to find common ground and look for mutual benefits. He discussed the role of technology with regard to change. For example, with regard to the Arab Spring, he said that social forces led to the change, but technology enabled the change. He compared societies to systems and supported the idea of analyzing our connections in school. 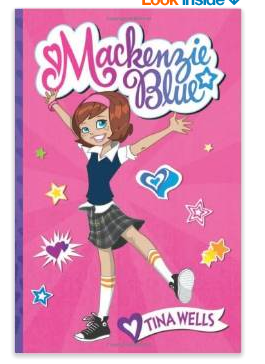 Tina Wells, Founder/CEO of Buzz Marketing, said her success began, in part, by the fact that every time she reviewed a product when she started her career at age 16, she sent a thank you not to the product team/company. That was one way that she created connections.  She went on to discuss marketing as the business of influence, and added that we make decisions and influence when we spend money and buy products

When a parent spoke to Ms. Wells about her young daughter's interest in reading Gossip Girl, Tina was inspired to create the age-appropriate Mackenzie Blue character and books  to provide a positive influence for girls.

Raghava KK, artist, speaker, and entrepreneur, talked about the purpose of education. He defined education as a system that does for you while learning is something you do for yourself.  He suggested teaching everything up/down rather than down/up and illustrated this with the idea of exposing students to a large number of varied examples of a concept such as circle or triangle and then letting children infer the meaning. He also noted that it's important to teach children how to read visual images and models. He expressed that there is not one right or wrong, but instead many rights all dependent upon context adding that creativity is the best tool for judgement and kindness.  He cautioned us about Google algorithms that determine what we see when we search. He thinks that those algorithms without a balance of other approaches have the potential to put us in a bubble and close our world with regard to others. He said that we ". . .are defined by what you are and what you're not. . .you have to find your own voice." He also quoted his uncle who said, "The one thing you never own with your children is their passion." He encouraged us to see the future, continually change, and constantly reimagine our future. I look forward to reading and thinking more about Raghava's ideas and creativity.

Further discussion about connections continued after each panelist had a chance to share their story and ideas. Raghava KK wondered why there are "so many ways to connect, but we still feel so lonely." All seemed to agree that connections require "tender loving" care and attention. Later the idea of systematizing connection came up. And there was some debate about how much control consumers truly have with regard to new products and services.

It was good to see four accomplished, confident, creative individuals who are following their passion and making a difference in their fields and other areas. It was also good to have the chance to speak to the many dynamic educators attending Educon 2.7. I enjoyed listening to their stories and perspectives related to education. Tomorrow during Educon's conversations, I'll be able to bring these ideas forward as I listen to educators talk about their work with connections and specific learning/teaching topics.
Posted by Teach Children Well at Friday, January 23, 2015