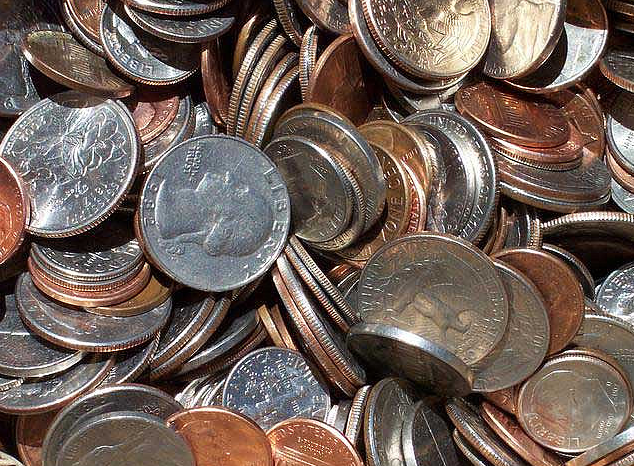 A student complained yesterday, "The lessons are too hard."

I thought about that as I designed a lesson for today. I wanted interesting numbers as well as an inviting introduction, 5-minute teacher instruction, and a tiered activity including a manageable, easy-to-access first tier, practice second tier, and enriching third tier.

All in all, the lesson went well.

I used the chart below from the U.S. Mint as a source of good decimal numbers to work with.

Next, I placed a number of coins under the document camera and we discussed the size of coins. Coin attributes were shared as students completed the first chart in the packet which asked them to match a coin with the weight of that coin.

As we discussed weight, we talked about the attributes of a coin's size such as length, diameter, radius, weight, and the material it's made with.

Then we reviewed that list. After that students worked with partners to order the weights in order from least to greatest on a chart. They also had to write the weight in number name form (word form) and expanded form. If they finished early, they could practice the same task with the measurements for the thickness of coins. Most students finished task one, and a few had started task two.

At the end, we gathered again to talk a bit about the task, and then I showed them this video about the process of making coins.

Overall the lesson went well. It was tiered better for the various groups of learners in the class with respect to their experience, skill, and pace with the activity. Making the numbers meaningful also worked for engagement.

We'll move forward to using more wonderful numbers to continue our efforts to read numbers correctly, write numbers in multiple ways, chart number proportionally on number lines, and round to various places in the the coming days. Stay tuned.