This is coordinate grid week. It's also the first week of the year when we're ready to tackle unit standards with a learning sequence, a sequence we'll apply to later units.

Since this is the first time I've taught the new CCSS fifth grade standards, working through each unit takes lots of time and attention. I will apply a similar sequence of events to each unit.

1. Whet Their Appetite, Make it Meaningful
We'll take a look at the aerial photo of the playground. 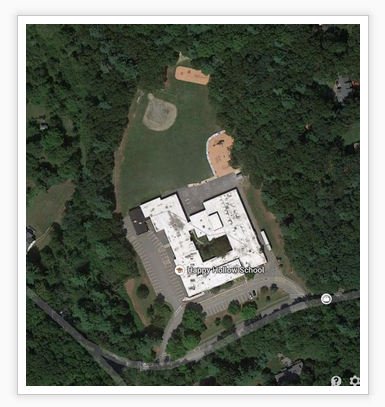 I'll say, can anyone locate the "back swing set." I'm sure hands will raise quickly, and I'll let students describe where it is. I imagine they'll say things like "in the back," "next to the trees," and "far from the building."  I'll write their words down, and underline the location words such as "next to," "far from," and "in the back."

After that I'll explain that mathematicians aren't satisfied with vague descriptors since they like their descriptions to be precise and exact. Math brings order and organization to our world, and that helps us to see patterns and determine relationships.

One way to order or organize a map is to overlay the map with a coordinate grid. Then I'll show the coordinate grid map overlay and explain how using the grid provides us with a set of steps with which to see the map and talk about it.

I'll pass out the grid map to all and we'll identify the vocabulary.


We'll complete the worksheet, graph a few significant ordered pairs on the school map, then practice making a picture with ordered pairs.

Finally, at the end of the lesson, we'll review the vocabulary with this catchy Flocabulary rap.

2. Provide Opportunities for Review and Study for Homework
I will encourage students to sing the Flocabulary rap for homework. I'll also ask them to practice drawing a number of pictures using ordered pairs and practice the concepts using Khan Academy.

3. Roll out the unit with review, practice, and new learning.
The next day we'll review the unit standards in student language (see below). Then I'll pass out the Flocabulary lyrics and we'll revisit the song. Together we'll solve some real-world problems by graphing points and interpreting values.

Thursday will find us using Khan Academy's great example of using coordinate grids to find the relationship between two sequences.

4. Master with Application, Content Creation, and Share.
Finally, on Friday students will use their new knowledge to create their own real-world problems (using measurement information) that can be solved and/or interpreted on a coordinate grid. Application of the new information in a meaningful way is the best way to master the content. I will share that activity when we get there.

5. Unit Review, Study, and Assessment
Next week students will review all standards related to our first math unit of the year. I will teach students multiple ways to study for an assessment in order to learn the material well.

As I've stated before there's a temptation to rush the standards and the teaching/learning year, but if we do that, students won't establish important routines and dispositions that lay the foundation for engaged, successful math learning and thought. I'll make the time to reach all standards, but we'll do it in a thoughtful, student-centered way.


The standards in student language:


Coordinate Grid Learning Standards:
Monday and Tuesday:
Wednesday
Thursday
I will observe the relationship between the terms in one sequence and the terms in another.