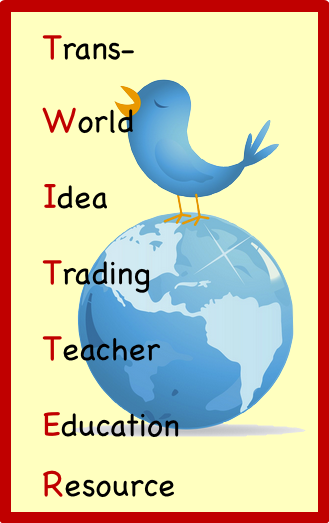 During a recent #edchat on a Tuesday night, Adam Taylor @2footgiraffe, a high school science teacher from Nashville, posed the merits of Twitter. I responded that we needed a professional learning acronym for Twitter, and two days later Adam tweeted me with an the acronym. I promised to create a graphic, and then about a week or so later, the inspiration to create an image came. I Googled "twitter-world" and found a great image on a TechinAsia blog post. Then using KidPix (my favorite image creating tool), I created the image to the left. Hence, an acronym and image or "sight-bite" to represent the value Twitter holds for professional learning in education.

Growing ideas today takes many, many paths.  It's eye-opening to trace the idea path. For example this path began with #edchat, a wonderful 12pm EST and 7pm EST Tuesday Twitter chat that connects educators with "conversation" throughout the world.  #edchat is most recently moderated by Jerry Blumengarten @cybraryman1, Nancy Blair @blairteach, Kyle Pace @kylepace, Steve Anderson @web20classroom, co-founder, and co-founder Tom Whitby @tomwhitby. Shelly S. Terrell @shellterrell is the third co-founder of Twitter. Moderators of #edchat do vary, and I apologize if I've missed your name (tweet me, and I'll update the post).

During the #edchat, the idea, as mentioned above, rose from a discussion that included Adam from Nashville, myself in Boston, and others from around the world.  Adam created the acronym and spread it to his PLN as well as back to me. I searched for an image, found a good one on an Asian blog, then synthesized acronym and image, and moved the idea back to Adam and #edchat, and then to my PLN.  I wonder where the idea is moving right now as I type--perhaps many places or a few or nowhere else. We'll see.

Ideas today move through multiple paths--amazing world-wide paths of thought, critique, and use. When was the last time you were involved in a new idea or creation?  How did that novel notion move? Can you trace the path on a map?  Just another example of today's amazing journey in education.  If you've got another amazing idea path to share, please do. I'm interested.