Lessons From the Basketball Court 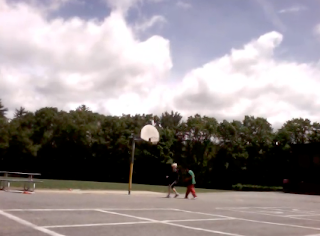 I've been observing students closely lately to see the reasons for their behavior. In particular, I've been watching play on the basketball court. I have one student who plays like a high schooler. He's also as big and strong as some high school freshman.  That puts him about four grades above the typical fourth grade basketball level of playing.  We could consider him an "advanced basketball student."

As I've watched him play, I've realized many things.  First, when he bumps into other students, they typically fall down due to his strength and size. It's not on purpose, it's just a result of his size.  He frustrates others by his ability as they often can't keep up.  He too becomes frustrated because he's ready for an equal match, a good contest, but that's rarely the case since most of his classmates can't play at his level.

What's a child to do?  You find similar challenges for students who demonstrate giftedness in all areas of school life.  How should they react when their peers can't keep up?  What's the best way to discuss this and plan for this in the classroom.

For starters, it's a good idea to discuss the situation with the class.  Today, I told the students that I noticed that one person is a bit stronger than the others on the court. I also explained that due to his size and ability, he sometimes causes people to fall down or become frustrated.  I then explained that this can happen in any area of school life as some are better at math, science, making friends, staying organized or coming up with a good idea.  Further, I explained that your abilities today do not predict your abilities in the future as with practice, interest and effort, students reach the goals they set out to reach no matter what their skill and ability is at fourth grade.  I proceeded to give examples of students I've known who have reached unimaginable success in areas that they struggled with in fourth grade.

Finally, I pointed out how our one strong basketball player is a good metaphor for challenge.  When students play ball with this student, they struggle, but they also become much better players.  The strong player also learns from the others as he's becoming a much better team player.  It's a win-win, but not one without struggle. Our challenges make us stronger, but not without a lot of effort and some struggle along the way.

As we all know, learning is not restricted to the classroom.  Instead it's a 24-7 process in life, and helping students to acknowledge that creates happier, more successful students.
Posted by Teach Children Well at Wednesday, May 30, 2012