Does Trump Speak the Truth about the Days Ahead? Time will tell.

We know that Trump lies a lot. We've all seen how his stories change over time. The story that exemplifies this the most to me is the story related to his dealings with Michael Cohen, his one time good friend and lawyer, who now sits behind bars for doing Trump's dirty work. With regard to Michael Cohen, Trump's praise for him turned to multiple derogatory remarks. To me, this was one of the most easy to understand, and witness, examples of Trump's fair weather friendship and persistent lying.

Yesterday I watched Trump read the speech that appears to have been written for him on national television. Unlike his theatrical performances at his rallies, Trump's voice was mostly monotone as he struggled to accurately read the words before him. To me he read the words without heart, empathy, or emotion, but instead, with a focus on accuracy. It seemed like someone told him he had to do this and he was complying--we have seen him read similar make-up speeches before with the same kind of quiet obstinance, a demeanor far different than when he's amongst fans and friends at his rallies as he performs his predictable Trump Theater routine:

So let's take the high road and negate what I witnessed and believe that Trump truly believes in the words he spoke and will follow-up with action. Let's see what that means for the days ahead. Should he follow his own speech, we can look forward to better days ahead with the following actions:

I agree that "We are a loving nation, and our children are entitled to grow up in a just, peaceful, and loving society." If Trump truly believes that he will work for that justice, peace, and love by supporting education, health care for all, and anti-racist efforts to make all children safe and happy. Let's see if he follows these words, let's remind him of these words regularly.

When he says, "In one voice, our nation must condemn racism, bigotry, and white supremacy. These sinister ideologies must be defeated. Hate has no place in America," I am happy to hear those words. Let's see how he acts with this in mind. Will he respond to the fact that the El Paso shooter appeared to mimicTrump's sentiments against Mexicans, immigrants, and refugees. Will he continue to forward hate speech such as the quotes below? Let us remind him of these words in the days ahead. 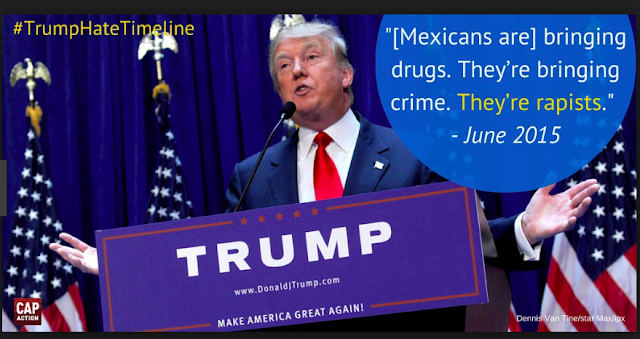 It seems clear that the El Paso shooter followed Trump's Internet calls to demean, disdain, and make life difficult for immigrants, refugees, and specifically Mexicans. When he reminds us that "We must recognize that the Internet has provided a dangerous avenue to radicalize disturbed minds and perform demented acts," does he recognize that his own words, in part, led to the massacre in El Paso in this way. Young men in America who share his ideology look up to him and follow his words--will  he take the ways he uses the Internet more seriously from now on or will he continue to incite hate and violence via Twitter and his rally theatrics? Think of the multiple hateful statements he made recently when talking to conservative youth:

We all have to think carefully about the words we use. This is emphasized when Trump says, "The perils of the Internet and social media cannot be ignored, and they will not be ignored." Will Trump follow his own words and use more care with his use of social media--use that often includes hateful, racist statements, lies, name calling, shaming, blaming, and disrespect. Will he change? Will Trump speak out against the way his followers often spread mistruths to ruin people's character? Will he speak out against the hate his own cronies/fans display on social media? Let's see if he follows his own words in this regard.

I agree that "We must seek real, bipartisan solutions," but I haven't seen Trump truly work for that kind of compromise. Friends tell me that during the Regan years, it was Tip O'Neil who had the great foresight and skill at working for bipartisanship--people tell me that his efforts to work for compromise were positive during those years. I have to study up on that more, but I see no effort on Donald Trump's part to date with regard to working on bipartisan solutions. The disrespect he shows his democratic opponents continuously serves to divide, not unite. You cannot unite with lies, disrespect, and self-serving policies for a few--you unite with a common vision of what's best for ALL Americans with respect for the viewpoints, hard work, well meaning and intelligence of each other.

I totally agree that "We must stop the glorification of violence in our society," and I believe this starts with President Trump. The video below shows Trump glorifying violence time and again. While I too don't think that a steady diet of violent video games is positive for young minds, his argument here does not hold true. Yes, the United States sells the most video games and has the most gun-related violence (we have the most guns too), but the countries that come in second, third, fourth and so on don't also come in on tops with regard to violent deaths or gun ownership either. I also agree that ". . .it is too easy today for troubled youth to surround themselves with a culture that celebrates violence." Just recently outside a Trump rally a young man beat up an anti-Trump protester. Trump rallies provide that "culture that celebrates violence" for today's youth. Will Trump continue to create that kind of culture at his rallies or will he doe as he supports in the quote above?

I also agree that ". . those judged to pose a grave risk to public safety do not have access to firearms," and I wonder why Trump and Mitch McConnell are standing in the way of the common sense gun laws that are ready to go forward in the Senate. Why do they stand passive when we know there is so much we can do to make our country safer. Is it their allegiance to the NRA money that holds them back? Is it there lack of understanding that a comprehensive public health assessment and plan to curb gun violence including the reduction, restriction, and regulation of gun use will mitigate this problem? If he truly believes as he says, he will get busy right away making change. The United States has far more guns and far more gun violence than any other wealthy, industrialized country in the world.