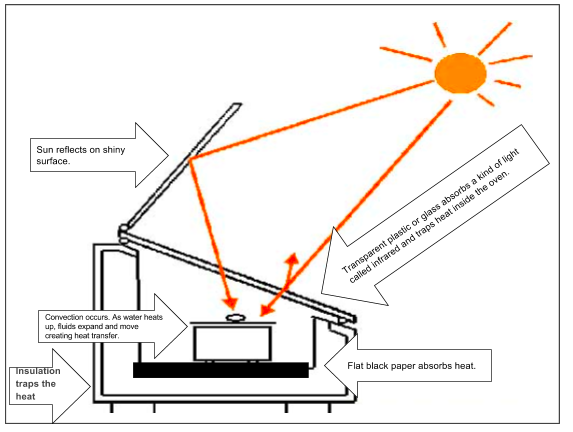 Our system has identified a number of STEAM projects for grades K-5. Each grade level is responsible for about three projects a year. Tomorrow our grade-level will embark on the solar oven project.

While you could literally spend weeks on this project, time is short in standards-based public schools so we've dedicated two lengthy science times to the endeavor. What will students do?

First we listed a large number of introductory videos and tasks that students could do on their own to prep for the project. Tomorrow we'll focus in on two of those videos--one that sets rationale for solar ovens and one that introduces how to make a simple solar oven. Then student groups will make ovens, and test them out by heating water in the ovens. There will be some follow-up science study, reflection, and next steps design too.

The second day of the project will find students re-designing their ovens to capture more heat, and then they'll test the redesigned ovens by cooking s'mores. After that students will have a chance to reflect on the next iteration of their oven what it will look like given all the information they've learned through invention, trial-and-error, science reading/study, and talking to one another about the project.