It was once again an amazing day of learning and inspiration at Educon 2.9. I was so happy to see so many educators from more than 30 states who are invested, creative, and doing the big work of teaching children well every day. I was also very happy to watch and talk to the SLA students who were so enthusiastically engaged in leading the event.

The morning began with a welcome by Chris Lehmann who encouraged the full house of educators to teach critical thinking skills in order to provide students with the tools they need to make sense of a bewildering world. He said that we have to work well to sustain our students. Next William R. Hite, Jr., the Superintendent of Philadelphia Public Schools, gave the keynote. Dr. Hite noted that he wants schools to utilize smart systems and be healthier places for students. He noted that The Science Leadership Academy is an amazing student-powered school, and the staff is a beacon of instructional practice. He further encouraged all educators to keep students at the forefront and energize them in ways that we haven't done in the past.

After the keynote, I attended Gary Stager's conversation which imparted a great deal of inspiration and challenge to make our teaching/learning programs richer. As you'll see in the Storify notes above Stager frequently quoted many leading educational leaders including Seymour Papert. Stager emphasized that young people have a remarkable capacity for intensity and challenged the educators in the room to make school the best seven hours in a child's day. Stager quoted Papert when he stated, "Of course kids should reinvent the world,' and prompted us to allow student to do the learning by making because heads, hands, and heart matter when it comes to valuable learning. My inital active response from Stager's talk will be to reimagine the upcoming fraction unit as a student-driven maker unit, and to let students use coding to demonstrate their mathematical thinking.

Next I attended another amazing presentation by a host of educators from South Bronx Community Charter School. Their dedication to the students, creativity, and meaningful learning was amazing! They described in detail an interdisciplinary Dream project that students were involved in that derived from TA-Nehisi Coates book, Between the World and Me. Students studied the book and responded by writing letters, publicly advocacy, data analysis, movie making and more. 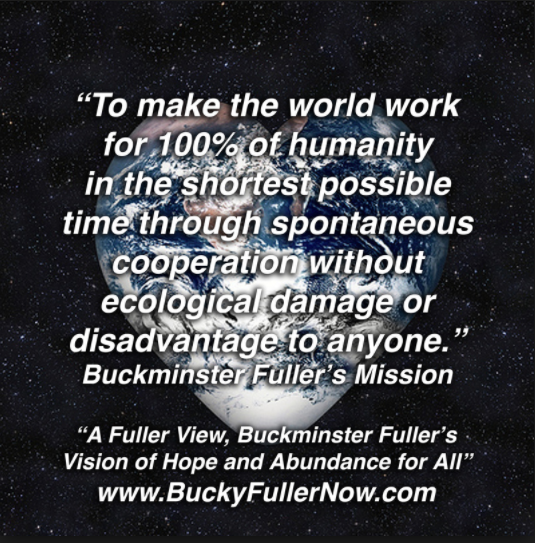 Finally I attended the Spaceship Earth conversation by Brooklyn educators Andrew Zimmerman, Lynn Shon, and Aaron Kazwell. I was very interested in their project since our fifth grade curriculum is focused on the environment and we are currently working to embed new standards and build that curriculum. Rather than using money to order kits, I would like to work with colleagues across the system to create a more hands-on, multidisciplinary approach to our new curriculum, one like Spaceship Earth. It was clear that these Brooklyn educators, similar to those from the Bronx, dedicated hours of collaborative effort to creating this multimodal, inspiring, and engaging curriculum that included expert visitors, many local field studies, a local meaningful problem, hands-on problem solving/creativity, student choice and voice, and final presentations. Their expert mentor for the overall project was Buckminster Fuller and inparticular, Fuller's quote to the left led their year-long study. On the door of their school they have another Fuller quote that states, "We are called to be the architects of the future, not its victims."

They recommended a year-long narrative like Spaceship Earth that ties the curriculum together. This idea reminded me of the McAuliffe Center STEAM conference I attended this summer, a conference, in part, that highlighted the film, The Overview Effect - a film that fits nicely with this study. Throughout their study which consists of multiple missions, they use the design process and embed both content and cognitive standards. As an interdisciplinary study, they look at the problem over time and via many perspectives. They sited tools and resources they used including Vision Maker, physical prototyping with cardboard, paper, adhesives. . ., whiteboard tables, NOAH/NASA resources, Manhatta Project, tracing paper, 3D design tools, peer critique guides, and SCALE.  They get students outside and allow students to drive the learning as much as possible.  They generously shared their presentation with us.

It's difficult to capture all the ideas and information shared, but it's impossible not to be inspired by the enthusiasm, experience, and skill the many educators I spoke to and learned from demonstrated. Tomorrow I'll return for Day Three and even more inspiration and learning. Onward.