Post Update: I notice that this post is being read, and as I reviewed it, I realized a lot of the information is now outdated a couple of years later. 10/15/2017


As we discussed a few math questions this week, I was prompted to review the math year in general.

Since teachers and students are tested on the information, most teachers accelerate the Scope and Sequence so that they at least introduce all concepts and information prior to the big tests--tests students and teachers are judged on. That acceleration may be a fact why some students lag behind as they may not be able to keep up with the program pace.

As you can tell this situation puts both educators and students between a rock and a hard place. If educators are to follow the Scope and Sequence as set then most students will not do well on the tests that contribute to their performance rating, yet if they accelerate the pace of the program, then some students won't be able to keep up. So I expect we'll collaborate around this issue in the days ahead.

In general, I feel that math should be a two-stage program. The first stage should focus on helping students develop a rich foundation of number and operation skills with lots of practice, games, tech exercises, and hands-on, visual learning.

The second stage could continue to be grade-level and this stage would focus on what Boaler describes as "floor to ceiling" differentiated, collaborative, meaningful explorations and investigations that embed math concepts and problems.

This two-stage approach, I believe, would be a good bridge from the current core classroom/RTI approach to a more differentiated, targeted, and focused approach that builds students' skills while also engaging them in rich math explorations and projects.

This kind of movement in math requires rethinking lots of school structures including staffing and schedules.

In the meantime, however, as I think about the past year's program, I am pleased with the way we engaged with Response to Intervention (RTI). In general students got a lot of targeted support with great teachers and activities. Students were generally eager to go to their groups and enjoyed the learning. Assessments demonstrated good growth overall.

I was also happy about many of the projects and investigations we completed related to the Common Core Standards. Of course, there's always room for growth and change. As I look at this great chart of the fifth grade standards, I have the following thoughts for the future. 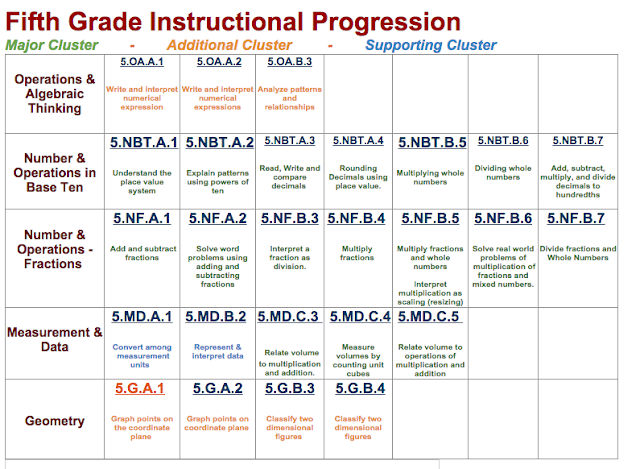 Measurement and Data
To build greater team, I want to begin the year with a great measurement and data investigation where students are given the opportunity to "represent and interpret" data. We will create a class infographic which we'll refer to all year as we study and learn math. This will be a good get-to-know-each-other project. We will employ the use of line plots in this study at this point and later during our fraction study. (Hubspot will be a resource for this project)

Operations in Base Ten
Students love learning the history of the Base Ten system, and then thinking about this in terms of the question, "What is a system." Later we create a large number of visual and animated models to "understand the place value system." Eames "Powers of Ten Film" brings depth to student study as they "explain patterns using the powers of ten." Statistical information related to the universe both matches the Eames' film and helps students "read, write, and compare decimals" and "round decimals using place value." Problem solving with money and other real world facts is nicely connected to learning to multiply and divide whole numbers as well as to add, subtract, multiply, and divide numbers with decimals to hundredths. Letting students code animated models of base ten number system "behavior" builds deep meaning of how the base ten place value system works.

Numbers and Operations Fractions
The new year is typically when the fraction study starts. During that unit we focused on a large number of visual online and offline models, videos, problem solving, and exercises as we studied fractions step-by-step. We started with vocabulary and landmark fraction models. Later we looked at how we could add and subtract with models, then addition and subtraction algorithms. Again we used multiple models. We applied this learning to problem solving. We found that matching each fraction concept with a story really helped students to understand the concepts. The stories I used included the following:
Focusing on those stories at first and drawing models brings meaning to fraction operations. Later having students write their own stories and make their own models brings even greater meaning to fraction knowledge and understanding.


Geometry
The fifth grade geometry standards are generally quite easy to teach, and require repetition for memory. There's lots of fun activities you can do to develop these concepts throughout the year. For example students studied this topic, in part, when an origami expert came in. Students enjoy graphing points, making coordinate grid pictures, and finding and analyzing patterns using a coordinate grid. It's good to start this study early in the year and integrate it throughout other units as students look for patterns and deepen their understanding of concepts. Identifying and comparing 2-D figures is a great early year lesson that can be combined with an introduction to visual literacy, model making, and the use of multiple math tools.

Measurement and Data
Teaching volume and measurement conversions also can be taught through wonderful interdisciplinary explorations and activities which I'd like to build more on in the coming year. For volume students started by making prism nets and figuring out the volume. Students also used cubes to create multiple models of volume problems. Next year I want to use sugar cubes for this. I want to explore the creation of more varied models in this regard and review the exact vocabulary used by the Common Core Standards as we "relate volume to the operations of multiplication and division."  I think we can look closely how we teach measurement conversions with regard to studying the base ten place value system, our science unit on matter, and fraction study.

As I think about the program in general, there are a number of factors that support a strong program including the following:
As I look ahead to next year's math teaching/learning year. I'll reread these notes and review this year's PARCC and other data to look for trends. I'll also read upcoming information about Massachusetts' new Next Generation MCAS and reread Boaler's book, Mathematical Mindsets as well as other related information.

I really enjoy developing a strong math program with colleagues and students to teach well. Let me know if you have any suggestions.


Note
I will utilize the articles on this page to inform next year's program as well as other resources.