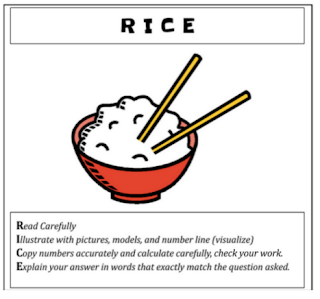 Today students continued working on a short, targeted process for solving word problems. Essentially they did the following:


I purposely used somewhat simple problems so students could focus on using a variable, writing an algebraic sentence, and answering the question with an explicit sentence that matches the question asked.

I reviewed the acronym, RICE, that we used to guide the problem work. Then I modeled one problem. After that student after student got up to model the problem work for the class. It was great to hear students apply the strategy. And even better, it was wonderful to see how students represented the problems with models.

Tomorrow students will have the chance to apply this process as they take part three of the systemwide math test. It will be interesting to see if they apply what we've been working on as I walk around the room.

In general, it was a good lesson, one that we'll build on a lot next month as we return to the POWerful SRSD approach to solving multi-tiered math problems.
Posted by Teach Children Well at Monday, February 29, 2016